I’ll Build You Up Buttercup

International Women’s Day, “Dancing Man” and the hashtag #morealikethandifferent , really got me thinking this weekend.  The combination of the three has unlocked an urge to: “disperse kindness like dandelion fluff.”   This quote is stuck to my mirror and is supposed to serve as a reminder, however, it often goes unnoticed. Sadly, so does its message.  This is not to say that I am unkind.  I was never brought up that way.  I have never been malicious or sinister by nature.  I just feel that the effort of kindness is such an important gift to others and if I can give it out freely why am I not offering it more?.

First, lets talk International Women’s Day.  I was never considered a “girlie girl” growing up.  I had two brothers and was often found on our driveway playing basketball with the neighborhood boys. I use the term “playing” loosely as I think the only one that ever passed me the ball was my dad.  I remember one incident where us kids went to the bank with my dad and the teller called “bye boys” as we were leaving. Not my prettiest moment. Anyway, I continued to gravitate towards guys later in life.  I was the one girl doing shots or  playing hold’ em and I could keep up with the best of the boys.  I prided myself on my tough chick facade and was slapped more than once for hanging out with someone’s boyfriend.  I was anti anything girlie and I was damn proud of it.  Now,  I’ve lived with boys for over 10 years and I just have realized what I disservice I did to my younger self.  Yes, there is an ease of living with the male species and you will most certainly get your way with them.  Start with a few pouts, sprinkle in a note filled with exclamation points and finish up with a few minutes of the silent treatment… BOOM!  the world is yours.  However, a guy will not tell you that you look beautiful, even when you don’t, but just because they know you need to hear it.  Men are great but they aren’t us.  They don’t possess the art of perception and they don’t know the right thing to say at the exact moment you need to hear it.  I’ve never met a man that says: “hey, lets cook so and so dinner because they seem busy with their new baby,” or “I should really send my buddy a thank you card for that shirt he got me,”  OR “I should buy my buddy a shirt for his birthday tomorrow.”  Stuff like that doesn’t generally happen.   Guys don’t usually notice our subtle highlights or our not so subtle hints; but wouldn’t it be weird if they did?  This is why we need each other.  We must use our powerful intuition to sense when our fellow woman is in need, we must fly off to save her and wield words. Our words hold such great power and they can be our strength or our kryptonite. They can be used for the best intentions and their pain can sting like no other.  So why not vow to build each other up?  It’s so easy.  It’s “you look great today,” it’s “how are you doing?” it’s winking smiley face, it’s “I love you”  or my personal favorite,  “I am on your side.”  That’s it.  We have the power to make each other’s day so why would we EVER choose anything but?  To all my girls out there.  To my close friends, my face book friends, girls that I have never met in person but I now “know” through the Down Syndrome community.   To Grandma’s and store clerks, and bus monitors and nurses.  To women fighting for their life or fighting a battle I know nothing about:  I love you.  I love your spirit, your strength, your sensitivity and your big giant heart. I love you so much and I vow from this moment on to do nothing but build you up because I have the power to do just that!!! 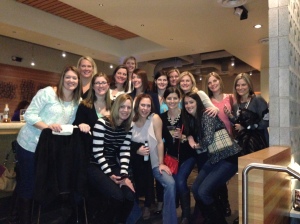 Now, although this seems like a fitting time to step down from my soapbox, I must march on.  I must not only fight for the women of this world but for others as well.  I must carry on and on and on and on….So, on the Today show this morning there was this piece about a man who had less than stellar dance moves and a not so coveted physique.   A bystander saw his moves and proceeded to record him and later ridicule him on a YouTube video that went viral.  He did so anonymously, I might add.  The cowardly lion has nothing on this guy.  I did not see the video and will not watch it as to “take a stand.”  Apparently now days I am the self-proclaimed  proprietor of the underdog.  Anyway, a group of women (there we go being awesome again) decided to take these proverbial lemons and turn them into pure magic lemonade.  The women’s group is raising funds to throw this man a dance party that will be attended by celebrities like Pharell. Click here to watch the Today show video.  As I watched this, I could actually feel the metamorphosis that has taken place in my soul.  Here I was, silently applauding what these ladies had done; cheer-sing them with my coffee.   Pride-filled tears stung my eyes as I realized, I forever want to be on this side of the Mason Dixon line.  I no longer wish to be chuckling at the lack of this man’s swiftness.  I would much rather be the one dancing with him to the beat of HIS different drum.    What is “cool” has totally changed for me and I feel like (praise God) society is in on the movement.  Different is beautiful and sameness is silly.  Why would we want to be all alike?  What a boring world it would be.  This is my mentality now.  This is a complete 180 from the high school girl who wore her peer pressure on her sleeve. I’m proud to say beauty has a complete different meaning for me now.  Beauty is the groups of people fighting for the unlikely winners of the world and oh my;  what a wonderful time it is for my son to be alive.

My love for the hash tag #morealikethandifferent may lead you believe that I am indeed contradicting my above mentioned point, that I want it to be both ways.  You may think that I want my son to be treated the same as everyone else but that I want to celebrate differences. I guess you would be right.  It is a contradiction of sorts. What is the same about all of us is that we are all different.  Whoa, did I just blow your mind right there?   It’s the truth.  We all have our achilles heel.  We all need help and we all want to be happy.  Today I read Kelle Hampton ‘s blog, as I often do, and she spoke of our children with Down Syndrome becoming our teenagers with Down Syndrome.  These teenagers wish and want just like other teenagers and just like all Down Syndrome milestones, even their wishes take longer to come true. Imagine wanting the college experience ( even if you don’t know what that looks like for you) but knowing that it will never happen.  Well, I for one, cannot stand the wind being taken out of even one person’s sails.  Not a one!  Everyone deserves happiness and though it’s a long way off for me, my son deserves a shot at college if that is what he wants.  So, I am taking the Ruby’s Rainbow Pledge and I ask you to do the same.  In honor of World Down Syndrome Day on 3/21/15, Ruby’s Rainbow would like to raise enough money to send 21 people with Down Syndrome to college.  My skin tingles just thinking about the barriers they are breaking!!!

IF you can’t pledge to Ruby’s Rainbow than pledge this….  Pledge to build people up, pledge to show them respect, pledge kind words and kinder actions.  Pledge to treat all people with care because you have no idea how fragile their package is.  Pledge to try and see beauty everywhere and in everyone and always pledge to see everyone as #morealikethandifferent  Judah and I thank you very much ❤

Posted by Finding The Joy in Uncategorized